It’s been one of those days…

I’ve started O on solid foods, and it’s been an incredibly messy venture. Yesterday I was constantly wondering, “green beans or poop?” Today we tried Buddy Fruits in the mango, banana, passion fruit flavor. Twice today I’ve had to do a load of laundry… Not O’s, because I was at least smart enough to put only a bib and a diaper on him. No, I had to wash my clothes, because O really likes to share.

I was checking my second load of fruit-covered laundry when I noticed that it was 5:00… and I hadn’t even thought about dinner yet. I figured chicken and rice would be quick enough, so I got some brown rice going in my rice cooker with chicken broth and a couple of smashed garlic cloves. While that was cooking, I defrosted a couple of chicken boobs in the microwave.

I melted some butter in a pan over medium, then threw in some chopped onion and (yes, more) garlic. When the chicken was thawed I seasoned it with salt and pepper, then it went in the pan to cook, covered, for five minutes on each side.

By the time the chicken was done my rice cooker had switched to the keep warm setting…but the rice wasn’t quite done. I decided it wouldn’t be a big deal since it was going in the pan with the chicken. I added chicken broth (about a can) to the chicken, garlic, and onions… then I dumped a couple of cans of Rotel sauce in.

I added the rice and stirred everything up, making sure to cover the chicken. It looked a little boring…I discovered a can of corn hanging out in the cabinet, so I drained it and threw that in as well.
Once the sauce started to bubble I turned the heat down, almost to low (3, if you have numbers on your knobs). I covered the pan and left it alone for about 30 minutes. The rice finished cooking and helped thicken the sauce and for a completely last-minute meal I’d say it turned out pretty well. 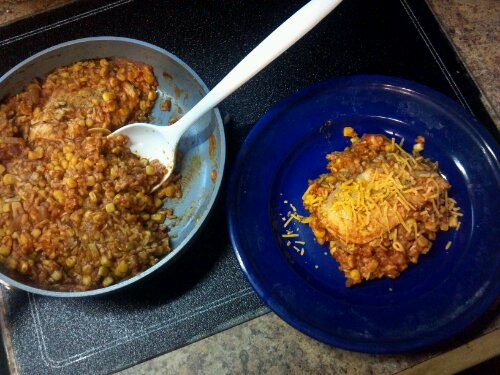 This would be awesome with some guacamole, sour cream (Greek yogurt!), and cilantro… but since I had none of the above I just sprinkled on a little cheddar cheese and called it done.

I was about to call the BF to tell him supper was ready when I got a text message.

It said “I’m at Wendy’s, you want anything?”

If you think for two seconds I didn’t ask him to bring me a Frosty…Well, I guess you don’t know me at all.