This week I decided to test out a beauty pin.

According to this pin, a simple paste of orange juice and baking soda will make your skin BEE-utiful. Since I’m obsessed with removing the nasties from my face I had to try it. I’ve tried a DIY pore strip recipe before and was less than impressed with the results…Maybe this would be better?

I didn’t use the exact amounts listed (me not following directions…big surprise), I just dumped some OJ into a pile of baking soda and mixed it up. 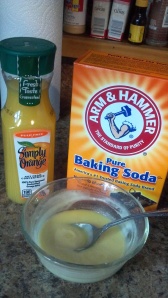 I have to say…this smells better than the last pore strip experiment.

After mixing it up I smeared it all over my face in a pretty thick layer. This step can get messy… It kept sliding off of my face and plopping onto the counter in clumps. 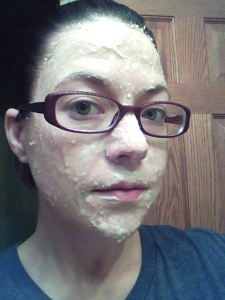 It’s pretty important to maintain a neutral expression… smiling or moving any part of your face will cause this to crack and flake off. You’ll be trailing baking soda all over your house if you aren’t careful.

If you have a 4 month old baby that’s starting to wake up from a nap go peek over his bassinet and watch his reaction. I’d say he was a little startled at the sight of me.

I think I left it on for around 30 minutes, and instead of washing it off in the sink I just decided it would be less messy to go ahead and take a shower…It was in my hair, anyway. After showering and drying off I smeared a layer of lotion on. 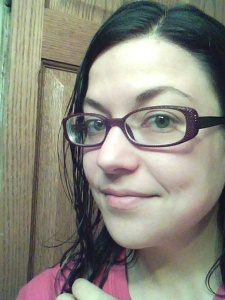 Well… It’s hard to tell in this picture but I wasn’t super impressed. I might have plastered some pore strips all over my face the day before but there were some stubborn blackheads on my nose I had hoped this would take care of. They were still there… I was actually surprised because there was definitely a tingle while I had it on AND my face burned a little when I rinsed it off. I figured that meant it did something…

Maybe this is the sort of thing you have to do once a week for a few weeks to really see results but I don’t have that kind of patience. I suppose I’ll just stick to my beloved apricot scrub and store-bought pore strips. Pinterest failed me this time.

Have you liked Willfully Disobedient on Facebook yet? All you have to do is click the Like button in the sidebar and you’re automatically entered to win a super neat prize from me!

I’ll randomly select a winner once I get 500 likes so be sure to share with your friends!

Stay tuned for more info, including more info on the super neat prize. Hint: it isn’t a million dollars.